Unfilmed Movie Soundtrack From the 1990's - the whole story

So I have a story to tell you, and it winds around a bit. This is the tale my new EP, made up entirely of music I released in the 1990's.

A lifetime ago I worked in Cable Television for my day job. Band at night, Cable TV Executive by day. Now this is long before Cable got glamorous or even paid well. You couldn't even tell people what you did for a living because they'd turn around and tell you how much their own cable sucks - as if I could fix it. One of the techs in the office had his own band and they were doing about as well as mine was, just playing a different circuit than mine did. His band was kind of country-blues while we were rock and roll leaning towards alternative.

One day he pulls me aside and tell me that I need to watch "Northern Exposure", a hit TV show from those days, the following week. He had licensed a song he had recorded to the show and gotten a hefty paycheck for it. In fact, he didn't have to work for a year, and his song played in the background of a bar scene, barely recognizable.

This seemed like a GREAT gig. I had released my first album by this point but wasn't yet signed to that disaster of a record deal that killed my second album. I was working on new material but what the hell; I'd shop around stuff from the first album.

And this went nowhere.

I kept trying though. I wasn't the indie musician I am now - hell, no one was. We were still all searching for the record deal, the big break, and the success stories kept us going. When Lisa Loeb broke through with "Stay" all of us felt inspired. This was 1994, and by this point I had left TV and moved to San Francisco to pursue music full time.

I still shopped music around, and late summer 1994 I got a bite. A producer liked a specific track on my first album and wanted to talk about it. Let the negotiations begin.

Weirdly, the song she was interested in was a track called "Defending Luther", which is one of my shortest songs, quickly telling my opinions about the story of Two Live Crew (you have google, look it up). Turns out she wasn't interested in the song, but in the GROOVE of the song. That's cool. It's a good groove.

She pictured the groove being used in a love scene between the male and female leads, and I can kind of see that - if it's a noir kind of feel and it turned out that it was. Feeling bold, I mentioned the album the song was from and sent her a copy. She sent me a rough outline of the script and mentioned some of the cast (I only remember one name, and I'll get to that). She selected three other songs and ON MY BIRTHDAY, 1994, she sent me a licensing contract. I signed. She signed. 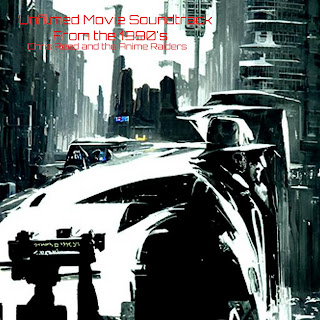 I offered to score the movie (or at least some of it) and we were negotiating about it. I would get frequent updates about the movie.It was going to film in Paris in the winter. I saw a couple of notices in the trade papers, that such-and-such actor had signed on to the project and so on. We had phone calls and e-mails back and forth about what kind of music would work in what scenes, other crime thrillers that we were copying the style of, the possibility of throwing new music or finding other bands to include in the soundtrack. It was a pretty heady time for me. My big break had come.

And by the end of the year the whole project had fallen apart. I don't know what really happened. What I was told was that the financing fell apart, which happens in these sorts of things. The schedule moved and the lead actor bowed out. I started getting excuses, missed phone calls, missed meetings.

I contacted my lawyer (I have a VERY GOOD lawyer) and he told me that I have a contract - it doesn't matter if the movie gets made or not. I get paid either way. I had a solid contract for a $50K license fee and I should demand payment.

So I did. I was given a few excuses about "you don't understand how the movie business works" (I actually do - former TV executive and all that, a distant relative with an Oscar, plus a few other things I'm not going to get into now). If the movie didn't happen I wasn't going to get a dime.

The Bankruptcy was done in Texas and I could not attend the hearing.

I didn't get paid. That lead actor, who had a contract where he got paid whether he did the role or not, was also named as a creditor. I have no idea if he got anything. My lawyer wondered if the producer had done this kind of contract with everyone and the whole thing just imploded. I never found out.

I do know that this producer tried to launch a different movie several years later with the exact same results. I like to think that she's a Walmart greeter now but I honestly have no clue.

I'm doing fine these days. So is Phillip Michael Thomas - the actor who was supposed to be the lead and used to be one of the stars of the original Miami Vice - went on to make a move called River of Stone instead. A distant relative of mine was in that movie (the same one as mentioned above) but alas we never spoke about it. The fact that Thomas was to be in the movie is one of the few things I know was true - he was also listed as a creditor.

Well, the world kept moving on and so did I. Three years later I would be signed to my second record deal and have a new album out and the industry began to change. It's been a long while now, and there's no point being bitter about it. It was an event in my life from nearly a lifetime ago and that's that.

But now that I'm a well-established indie musician with a following it occurs to me that I can take control of the soundtrack of the movie that never happened and release my contribution to it on my own. So here it is: "Unfilmed Movie Soundtrack from the 1990's" - a collection of material I've previously released under a different name a long time ago, packaged as it would have been in the mid 1990's.

First of all, I play everything, and make every sound - including the dog barking on "Defending Luther". The workhouse of these songs is my 12-string acoustic guitar, but I would not consider any of this acoustic music. This is alternative rock.

Track 1: "Razor's Edge". Yes, the song is kind of dated in terms of sexual mores these days but at the time it was daring. Our bassist actually blushed the first time he heard it. It's VERY VERY Hetero, and I acknowledge that. It's not a song that I would write today. In my defense it's based on a real person, and she gave permission for me to perform and play the song long before anyone else heard it. She firmly believed (and I agree) that there is no reason that the woman in the relationship can't be the dominant voice. Bill Kroedel, who engineered the track, loved how the 12-string echoed slightly in the room.

Track 2: "Cross-Examination". This was actually a single back in 1990, although it didn't really go anywhere. The names in the song are just random picks. I wanted the song to have the feel of a "dark" Wonder Stuff song.

Track 3: "Defending Luther". This is the song with the groove. It was inspired by the story of the Florida Rap band "Two Live Crew", who at that time had been sentenced to prison for the quite frankly filthy lyrical contact of their work. It became a big 1st amendment issue and court case, and got a ton of publicity. I personally think the music was terrible, but they had the right to do it. They eventually won, but as of the moment I had written the song it was still up in the air. There is a spoken word section that my dad hated, because he didn't like swearing in songs. He liked the message, but not the "fuck you". This from a man who could swear like a sailor with 5 minutes left on shore leave and 60 miles still to drive. The groove is pretty nice - loosely based on a song by The Cure. The man from Compton was Ice Cube.

Track 4: "Back Pocket". This song has always felt like a scene from a Film Noir to me, and I wrote it as such. It's the only song in the collection (and the original album) where the vocals aren't doubled. The NPR station in Los Angeles played it a few times.

I had a lyric video made for "Razor's Edge", which I am releasing as a new single. The album will be available at all the usual places.

New music coming once my voice is fully recovered from having Covid twice over the summer. Soon!

Chris Reed
I'm a San Francisco based musician who was raised on politics and music. I'm a liberal and proud of it, and I do not tolerate idiots easily - especially when I'm the idiot in question. For music look up Chris Reed and the Anime Raiders on Spotify or Amazon Music or check out http://www.animeraiders.com