January. Remember January, all of 120,000 months ago? This has been such a long fucking year that I had actually forgotten that Neil Peart of Rush died THIS YEAR. Then Kobe Bryant and his daughter 2 weeks later. Oh, and somebody got impeached.I got my identity stolen. My neurologist told be that New Zealand was hurting for doctors and he had been asked if he wanted to move there. I wonder what he thinks now, given the year we've had.

In February the first caucus in the nation, Iowa, was screwed up because some asshole posted the phone number where results were to be phoned in to on 4-chan. I made my first post about COVID-19 in this month, and I predicted a disaster. I wish I had been wrong.

By the first of March the response by the current administration to COVID-19 had already resulted in 6 times the number of deaths we had from Ebola. I discovered the first "Covid Hoaxers", who attended CPAC. The first super spreader event in the US was a bio-tech conference. The biggest dip in the Stock Market in history happened in March. By Saint Patrick's day, better known as my Grandmother's Birthday in my house, I was already sick of the phrase "new normal". Rand Paul got Covid. We ran out of masks.

In April I posted my first list of notable people we had lost to COVID. It was heartbreaking. By this point I was also working on a secret project as a fund-raiser for Nurses working the front lines.

In May I attempted to reason with the people heading our country into disaster. We were still at less than 100K dead but the numbers were horrific. It was the last time I did so.

In June I began to realize that there is an unreported story going on with COVID-19 in that the number of people facing long-term affects of the disease is actually the MAJORITY of cases in the US, and no one is saying a damned thing about it.

I celebrated the birthday of our country by writing a lengthy essay about how the current administration was turning the country of my birth into a Prison Camp. I also wrote my definitive guide to how to watch Star Wars, which now that Season 2 of The Mandalorian has finished I will need to re-do slightly. George Floyd died in May with a man's knee on his neck, but it s was July that the police decided to attempt to clear out cities of protesters, resulting in dozens injured and secret police roaming the streets.

Finally at the beginning of August my secret project came out, an album of new music recorded by artists in quarantine to raise funds for Nurses charities. The dickhead in the Oval office signed a series of executive orders that resulted in the removal of tax relief in 2021, evictions, an increase in Student Debt, a racist screed against China, and soon to follow, BREAD LINES. And the Senate never acted on it. I wrote my infamous "shut the fuck up" rant.

In September I finally left Facebook for good. I still do not regret the decision. California caught fire, prompting the actual sky in my city to turn ORANGE for 4 days (the photo below was taken at NOON on day 2). The US fell out of the top 25 industrialized countries. We're 28! We lost the Notorious RBG, prompting the Republican Senate to actually get off their asses and do something - subvert the judicial system by appointing a self-professed "hand-maiden" to the court. 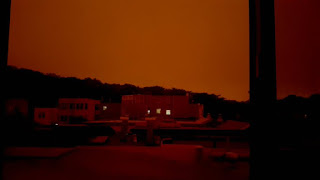 In October my recurring cough decided to exert itself and I wound up in hospital, which was a humbling and occasionally frightening experience. I had to wait for someone to die to get a hospital bed. I voted.

November brought us the actual election, and it took time but the right guy one this time. Danny Elfman made a musical comeback and my own song for this year got nominated for an award. I went on a twitter rant that was culminated by me using the word "cunt" against a member of the current administration (a male, by the way) which got me suspended from twitter for a day. I won that award.

And December? I wrote a lengthy essay about how just having vaccines isn't enough, Wrote about how one of my songs wound up on the Dr. Demento show, and did a write-up of the best in music in 2020, this is the post right before this one.

I have been advised by a couple of people to not post a "year in review" because yeah, 2020 sucked for everyone and at first 2021 is probably going to be even worse. But I do these every year and I find it to be cathartic - the chance to dance on the grave of 2020.